Questionable voting in the finance sector

On March 31, 2005, Lehman Brothers chairman and CEO Dick Fuld was re-elected to the company’s board with 87.3% investor support. Four years later Mr. Fuld was ranked as “the worst CEO of all time” by Portfolio magazine, and widely described as having professional and personal qualities that contributed to Lehman’s collapse – and, due to Lehman’s position at the heart of the financial sector, to the international financial crisis.

We do not know how every Lehman shareholder voted in that election, much less the reasons for how they voted. We do know that around two-thirds of Lehman’s stock was held by other prominent financial institutions, the top ten being Citigroup, State Street, Barclays, Morgan Stanley Dean Witter, Vanguard, AXA, Fisher Investments, MFS, Mellon Bank, and Merrill Lynch. Most of these firms and their managers would be expected to have repeated dealings with Lehman and its management. As a result, we would expect these firms to be particularly well-informed about Mr. Fuld’s shortcomings and to have voiced concerns about his ongoing concentration of power.
On the other hand, the combination of Mr. Fuld’s shortcomings and his power made him a formidable enemy. He is on record as saying “I want to reach in, rip out their heart, and eat it, before they die” about his professional adversaries.

It is a stimulating thought exercise to visualize Mr. Fuld’s reaction upon learning that, say, Citigroup or Merrill Lynch had voted against his re-election to Lehman’s board. We note that at Lehman, like at the vast majority of U.S. firms, voting was not confidential. This means that Lehman’s management could find out how each of the company’s shareholders voted. And this would raise a problem for Lehman’s institutional investors: even if they disagree with the management, is it worth incurring the management’s wrath by voting against it? 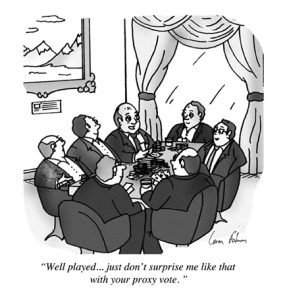 Of course, it is natural for managers to be unhappy with shareholders who vote against them. But for at least three reasons, such feelings matter more when the investee company is in the financial sector.

• The first reason is the “old boys’ network”. Decision-makers at the investing firm are especially likely to be connected to their counterparts at the investee if both have finance backgrounds: they are more likely to have received the same education, to be active in the same professional organizations, to have worked at the same companies in their past careers, and to expect to do so in the future. This increases the potential for retaliation (or reciprocation) at the individual level.

• The second reason is firm-level interaction. Financial firms are more likely to have competitor or supplier/client relationships with their investors than do non-financial firms. This means that retaliation and reciprocation can be channeled through such relationships as well.

• The third reason is cross-holdings of shares. A financial firm may hold shares in its own institutional shareholder, which gives the firm another potential means of retaliating for any anti-management votes by that shareholder, namely, voting against the shareholder’s own management. Conversely, investor and investee may reciprocate by supporting each other through voting.

How can we examine if our suspicions are founded? The only group of institutions systematically required to disclose their votes is U.S. mutual funds, and accordingly we focus our study on mutual fund companies. Our empirical tests suggest that all three types of conflicts of interest listed above do matter. Social ties between the voting and target firms increase the voting firm’s support for the target’s management. In addition, voting appears to be influenced by the fear of retaliation, both in the form of being voted against in the future and of being aggressively competed against in the future. Our results suggest that there is “clubbiness” in the way fund companies vote on each other. We then go on to examine the implications of this clubbiness. We show that directors elected in fund companies with greater own-industry support, monitor senior management significantly less.

To generalize our findings, we then use aggregate voting outcomes to assess whether financial companies as a group vote more favorably when it comes to their financial sector peers and we find that this is the case as well.

In short, the financial sector’s inevitable and extensive investment in itself has a deleterious effect on its governance. What can be done about it? We believe that our work has at least two important policy implications.

First, the notion of conflicts of interest which institutional investors address in their voting policies should be explicitly defined to include not only client/supplier relationships, but also conflicts of interest through product market competition and reciprocal investments. Such recognition would help take voting out of the hands of individuals most inclined to vote in a conflicted manner, or at least constrain these individuals’ discretion.

Second, proxy voting should be required to be confidential at firms in the financial sector; i.e. investee firms should not be able to discover how different shareholders voted. This would mitigate a key reason for conflicted voting, which is potential retaliation/reciprocation by the investee’s management.

It would be naïve to think that decision-making in business can ever be rid of conflicts of interest. But in the case of proxy voting in financial firms, the problem is important enough to deserve a close look from regulators.